we have stopped for a while.  i was busy with other things and you were busy slowly becoming smaller.  i came past two days ago and we ate ice cream and talked about traveling.  on steam trains.  through yugoslavia.  and sharing a cabin with priests. 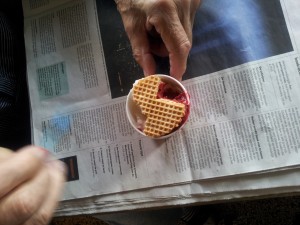 We made a begin.  Unpacked the chest and then I became sick for a week.  Wil too.  Not really sick, just not that interested in getting out of bed.

Maybe that’s too much information.

We found a chest full of puppets. Made with love by a woman about 15 years ago.  They were in Wil’s studio.  Wil had a theater group for a very long time, and was also ‘Pipo the Clown’, although going by the way he talks about that it’s not the part of his career that most reveled in.  He is now 86.

But these puppets, they were made but never used.  They were put in a chest and have been waiting.  We have moved the chest to a nearby cellar, the Mezrab, where we can start to play with them.

We will start on Wednesday.  Hopefully.  Peter van Os will come with his instrument.  An accordion. Hopefully Fleur will want to help us with productional matters.  So that we can play.  And bring life to the puppets.  Bring them into action.

A little film of us finding the puppets.  And me finding out I want to play with them ::

I came past to say hello.

I generally start to feel special when I see you. Feeling special means that I then start telling you all sorts of things, telling stories, telling jokes. I become a bit rowdy. As of yet it’s not a problem, I have a good time doing it.

You asked me to collaborate. I see that as an honour. In what way an honour I’m not entirely sure. And if I earn that honour also is yet to be proven.

What I know already is that know you had quite a lot to do with the school I just graduated from. I know that you have devoted your life to following your intuition and did this with a sturdy dose of integrity. I know that you are respected as one of the important innovators of theatre here in the Netherlands.

Perhaps I also see it as an honour because I like the idea that on seeing me you get motivated to come into action again.

You are an old man. People have warned me about you. The legend you’ve left behind is one of a stubborn man. A ladies man. One not to be trusted. Maybe we are a match in that way. Maybe I come across as a man eater. I hope not. I don’t feel like one.

Three times I’ve been to meet you after the decision has been made to try and capture you and your relation to the mime. Did you hate the idea to call the school ‘the mime school’? Do you hate the idea that it can be related to pantomime? Do you hate those deceiving hands of Marcel Marceau? And what about emotions, what role do they play in grand scheme?

Right now I don’t have my notes close by. I am attempting to make a start in putting our conversations in a form but I feel empty, I feel like I don’t know you at all. Like the pressure of nearing death and failing legs has put a strain on our fancy-free meetings.

I am a woman; I can’t separate myself from that fact. Not just any woman but one that enjoys attention and openly flirts with an 80 year old man. This is going to colour any thing we say to one another, and put a bias on questions I ask you. But I hope that my own commitment and curiosity to the body and all it’s joy and secrets will keep me on a track that genuinely listens and does some sort of justice to your story.