Short bio – Eva Kijlstra (1984): I started practicing Hatha yoga with my mother when I was 14. At 21 I discovered Ashtanga yoga and in 2007 completed an intensive teacher training in Auckland, New Zealand (certification YA200).
In 2013 I completed the Mime School here in Amsterdam. The yoga practice has funcitoned as a great support for both study and working. It functions as a ‘reset’, giving my mind and body a strong centre point to return to. 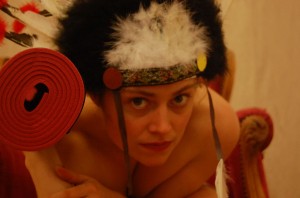 I discovered yoga through a small book I found when I was 10.  On every page were photographs of a young Indian woman doing yoga poses on a beach in a bikini in the 1960’s whilst always looking into the camera.  I thought she was very beautiful.  Her yoga was aimed at staying young and fit. I found this small book appealing and started copying the poses.

Since then my relationship to the practice has evolved through many phases, but most importantly, it has stayed.

Since 2006 I practice more or less only Ashtanga yoga and did a yearlong full time study in 2007 to become a accredited teacher.

Ashtanga yoga is a very dynamic and physical form or yoga.  The focus lies on building up a flow of movement and and synchronicity between movement and breath.  Through this flow and breath warmth is built in your body and this is used to cleanse your system, from the inside out.  A moving meditation.  One session takes about an hour and a half; beginning, middle and end.